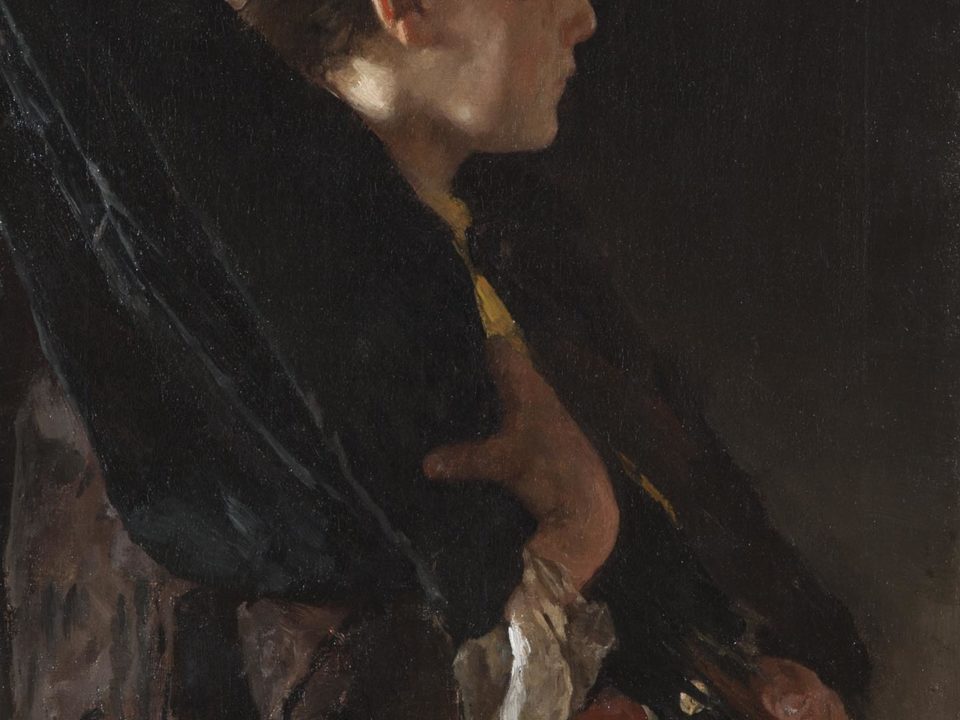 Born in Rome on 14 November 1852, Antonio Mancini moved to Naples with his family in 1865 where he studied at the school run by the priests of the Girolamini Oratory and attended evening courses at the Church of San Domenico Maggiore. In June of that year he began studies at the Istituto di Belle Arti. Here Mancini followed courses in painting given by Domenico Morelli, who encouraged him to study the Neapolitan and Dutch old masters of the seventeenth century, from whom Mancini drew inspiration to feed his studies in the depiction of light. In 1871, Mancini met Count Albert Cahen of Anversa, his first patron and collector, who helped him sell his first paintings in Paris with a display in the window of Alphonse Portier, owner of an antiques and art shop on Rue de La Rochefoucauld. Amongst these works is L’écolier portant ses livres that the dealer, Adolphe Goupil acquired in 1872. He had to wait for the artist to move to Paris in April 1875 to reach a commercial arrangement, signed on 18 July, that foresaw his return to Italy so as to preserve the fundamental elements of his poetic expression. In the first days of September, Mancini had returned to Naples where he immediately set himself to work. A month later, the inventories at Goupil record the acquisition of a significant number of his paintings. Despite the challenges and frustrations of living a life with very little money, even during his second Paris visit (1877-1878) the artist continued to work for Goupil, to whom he entrusted his more serene works, compared to those Neapolitan ‘dramas’ of his previous period. In these later works, the human aspect is cultivated less in a sentimental construct and more in its plastic strengths; form begins to dissolve away, sparking Mancini’s work on colour that will take the artist towards those explosive compositions of his mature period. In May 1878, he decided to return indefinitely to Italy, but not before completing his undeniable masterpiece, Acrobat with violin. In the following years he executed other important works like Coral sculptor, Pawn shop, and For sale! (all from 1878), as well as a series of landscapes, mostly on wooden board, recalling especially his experience in Paris, like the enchanting Villa Comunale, Naples (1880). In 1881, following a series of severe nervous breakdowns, Mancini spent time in a psychiatric institution where he painted some of his most intense and dramatic self portraits; two years later he moved to Rome thanks to his friendship with the Marchese Capranica del Grillo. He would later, in 1892, paint her portrait, now held in the National Gallery in London. It was to London that the artist carried out two important visits (one in 1901-1902 and another in 1907-1908) where he was a guest of the painter, John Singer Sargent – who helped introduce him to the English art market – soon convinced of his extraordinary talents in portraiture. Between these extended visits, in 1904, Mancini exhibited at the Düsseldorf International, the Saint Louis Universal, at the Italian Exhibition in London, and participated in the Rome International Exhibition with My father with birds. In 1905, at the ‘International’ in Monaco, he received the coveted gold medal for Portrait of Mrs Pantaleoni (1904), and presented his Portrait of father at the VI Venice Biennale. After several visits to Belgium and Holland – where one of his first patrons, the painter Mesdag lived – in 1908 he began an intense collaboration with the German art dealer, Otto Messinger. In 1911 he signed a contract with the wealthy French industrialist, Fernand Du Chêne De Vère, who received Mancini in his Frascati home until 1918, when the artist decided to move to Rome to live with his nephew. Here he continued to dedicate himself tirelessly to his work, characterised in this final period by a refined interest in the plastic definition of figures.

Nominated to the Italian Academy in 1929, he died in Rome the year after, on 28 December.