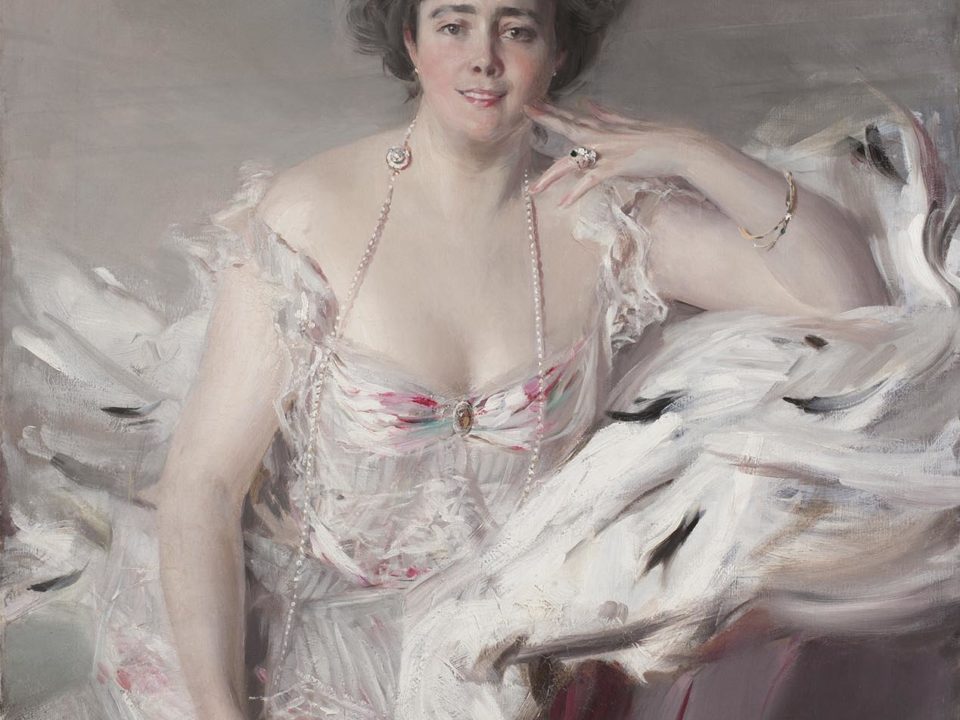 Giovanni Boldini was born in Ferrara on 31 December 1842 to Antonio – a professional painter – and Benvenuta Caleffi. From a young age he showed an innate talent for drawing that he would develop further by taking lessons from his father. In 1864, he moved to Florence, where he befriended Michele Gordigiani and Cristiano Banti, both well-known and financially stable painters. In 1865, Boldini painted portraits of those artists who frequented the Caffè Michelangiolo in unconventional poses on small canvases. Boldini’s striking innovative method is soon noted by Telemaco Signorini in a review in the Promotrice Fiorentina in 1867, marking the first example of a Boldini shown at an official exhibition. The same Signorini went on to introduce Boldini to Isabella Falconer, who immediately became his patron.

In June 1867, alongside a Greek friend and member of the nobility, Boldini took his first visit to Paris, where he visited the Universal Exhibition and saw works by both Courbet and Manet. He was fascinated by the cosmopolitan environment of Paris, offering him a glimpse of the multiple cultural opportunities and advantages for success that weren’t to be found in such abundance in Florence. In July of the same year, Boldini, together with Fattori and Abbati, is hosted by Diego Martelli at Castiglioncello.

In 1870, Boldini travelled to London with the German-Jewish art dealer, Reitlinger. He stayed in England for five months and it is here that, along with depicting important members of the upper classes, he renewed his admiration for the work of Alfred Stevens and Ernest Meissonier. In November he visited Paris once again and was so taken by the city that he decided to stay indefinitely. He rented a studio at 11 Place Pigalle together with his model and lover, Berthe. In the same period, he drew up a contract with the art dealer, Goupil, who drew him towards producing neo-seventeenth century scenes, highly fashionable at the time. Towards the end of the century, Boldini’s interest in the genre began to wane, and he returned to his former personal style, dedicating himself once again to portraiture. His new lover and model, Countess Gabrielle de Rasty, saw his social circle become increasingly global. At the Salon of 1879, he exhibited The Dispatch and, at the same time, he decided to join the ‘Committee of French painters in France’. During the 1880s he would carry out several trips, Holland in 1880, Berlin in 1886, Venice in 1887, and Spain and Morocco in 1889 in the company of Degas. During his travels he sought inspiration from the Old Masters in his search to upgrade the portrait genre. He would find it in the works of Tintoretto, Veronese, Tiepolo, Van Dyck, Velásquez, Goya, Reynolds and Gainsborough. From the beginning of the 1880s he also experimented with new techniques, like engraving and pastel. At the Universal Exhibition in Paris in 1889, Boldini featured both as an exhibiting artist and as commissioner for the section on Italian art. It was here that he exhibited The white pastel, and was awarded both the Grand Prix and golden medal. In 1895, the Mayor of Venice, Riccardo Selvatico, asked him to be part of the selection committee for the first Biennale, also tasked with seeking out relationships with the greatest French painters of the period.

At the Salon du Champ de Mars in 1896, Boldini displayed the portraits of the singer, Charles Max, and the Marquise Marguerite Rochefort-Luçay. On 20 November 1897 he exhibited in New York at the French branch of the Boussod-Valadon & Co. gallery, at 303 Fifth Avenue. In 1898 he returned to Paris. At the Universal Exhibition of 1900 he is again awarded the Grand Prix. In the Salon of 1911 he exhibited five paintings, and during the same year met Lina Bilitis, a new model who posed for him until 1919. In the same year he also received two important acknowledgements: the title of an Official of the Légion d’honneur and High Official of the Corona d’Italia. In 1926 his meeting with Emilia Cardona, journalist at the Turin-based newspaper, ‘Gazetta del Popolo’, is printed. They were married three years later.