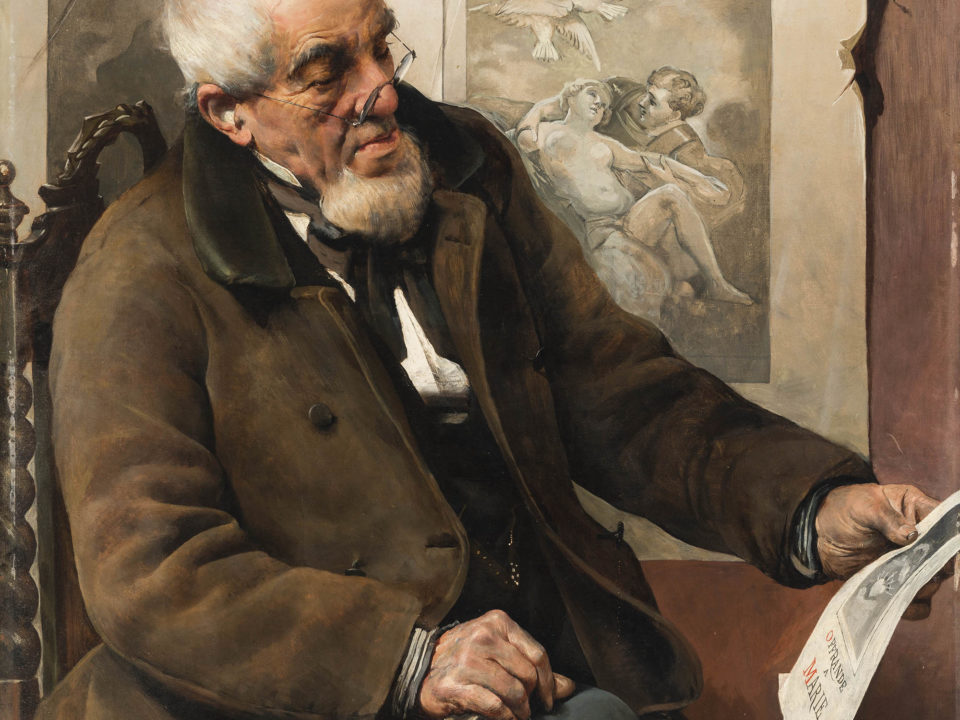 Vittorio Matteo Corcos was born in Livorno on 4 October 1859 to Isacco and Giuditta Basquis. In 1875 he moved to Florence where on 23 November he was directly admitted to the second year course of drawing of the local Accademia di Belle Arti. Two years later he is awarded the silver medal at the end of the academic year. Thanks to a scholarship provided by the Livorno Council administration, in 1878 he travelled to Naples to attend courses in painting given by Domenico Morelli at the Istituto di Belle Arti. He excels in his studies and his brilliance sees him exhibit at the Salvator Rosa Promotrice in 1880 with his Arab in prayer, bought by King Umberto I. In the same year he travelled to Paris where, with the little money available to him, he rented a small room in Vaugirard. His first few weeks are difficult, and to make ends meet he is forced to illustrate musical scores for the editor, Hegel, and to paint folding fans for fashion houses. His talent is noticed by Edmond de Goncourt and the Princess Mathilde Bonaparte, who invites the young Corcos to her esteemed parlour gatherings, attended by leading literary figures, such as Gustave Flaubert and Emile Zola, who Corcos befriends.

Despite these important contacts, he struggles to gain commissions and the small amount of earnings he does make are just enough to pay for the canvas, paints, and the model used for his first ‘Parisian’ painting, Les pensionnaires à l’église (1881) that Goupil buys and almost immediately sells to a Portuguese noble. The subject matter of the painting certainly helped the sale take place, conforming to the taste for cultured anecdotes promoted by the Parisian dealer, but also helping the sale was the artist’s new friendship with Giuseppe De Nittis, who much admired him and encouraged him to take his art towards a style of painting à la mode. The success of this painting is enough to convince Corcos to sign an exclusivity contract with Goupil for a period of fifteen years. From 1882 onwards, more than seventy of his paintings pass through the hands of Goupil and his affiliates, Léon Boussod and Theo van Gogh, who painstakingly produced colour reproductions to share amongst a large audience. Amongst these, the diptych Dis-moi tout! and Nous verrons! (1883), Idyll at sea (1884), Midday at sea (1884) and the watercolour Honeymoon (1885), are superior examples of this endearing style of painting, characterised by a modernity that satisfied the sensibility of the period. Despite his adherence to the style required by Goupil, Corcos was able to conserve his own expressive autonomy that often allowed him to experiment with new themes. À la brasserie (1881), exhibited at the Salon of 1881, and Figures on an omnibus (1881) are testament to his expressive versatility and the merits of his own totally personal artistic research that privileged the cruel foreground of a painful humanity, not far from that articulated by Zola and his novels.

In 1884, Corcos stayed briefly in England, while in 1885 he exhibited at the Paris Salon with Portrait de Jeune femme. The following year he returned to Livorno for military service. In 1897 he exhibited at the ‘Festival of art and flowers’ in Florence with the painting Dreams, considered by all his undisputed masterpiece. From this moment on his artistic output prioritised a style of portraiture that saw him soon become one of the most important portraitists in Europe, as confirmed with his portraits of the German Emperor, William II and his consort, Augusta Vittoria (1904), and those of Queen Amalia of Portugal (1905) and Queen Margherita of Savoia (1922).