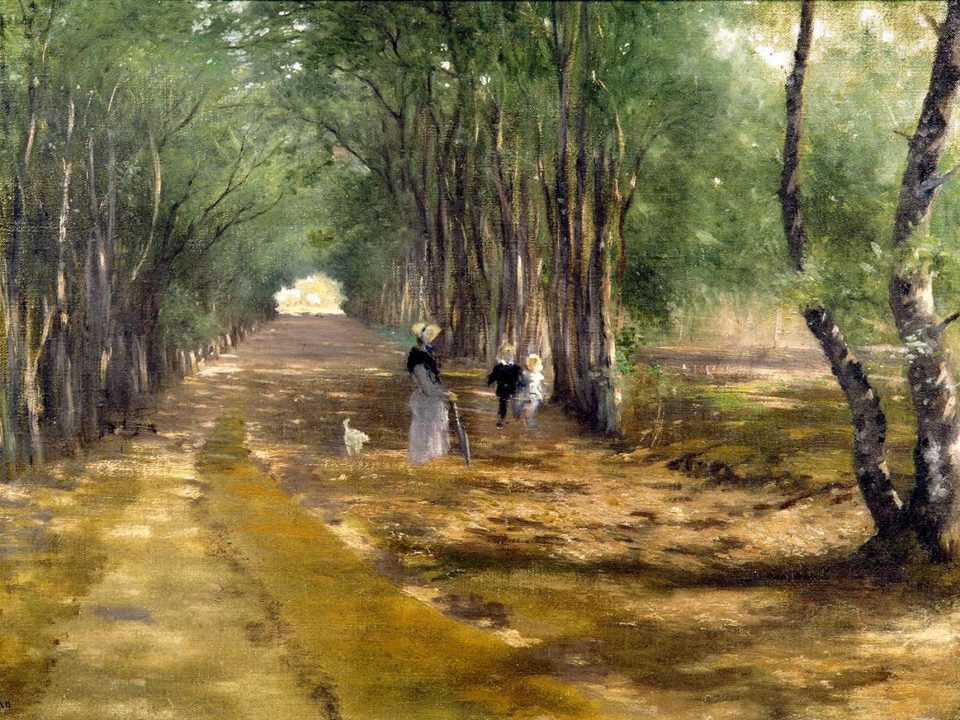 Born in Naples on 31 August 1835, Federico Rossano briefly frequented the Regio Istituto di Belle Arti, soon distancing himself with his preference for the study of landscapes from life, in the tradition of Giacinto Gigante. In the first years of the 1860s, Rossano spent time with the artists from the so-called ‘Resina School’, promoters of an anti-academic painting, executed en plein air with the panorama reduced to only its most essential elements. The results of this change in direction can be seen from the Naples’ Promotrice in 1863, with the painting, Wheat field. Rossano went on to participate in successive Promotrice exhibitions; in 1864 with Maria, 1865 with Surroundings of Lombardy and Castagneto in the surroundings of Lucca; in 1869 with After the bad weather; in 1871 with Surroundings of Ischia; in 1873 with Portici Forest; in 1874 with Marina from Ischia, and in 1875 with After the rain, Surroundings of Bougival, Portici Forest and Surroundings of Vesuvius.

In 1871 he signed a contract with the art dealer, F. Reitlinger, whilst between 1872 and 1877 he collaborated with the Parisian art dealer, Adolphe Goupil. Together they acquired ten paintings, amongst which Marché aux bestiaux environs de Naples is awarded with the second place prize at the Universal Exhibition in Vienna in 1873. The painting is so admired by Goupil that he commissions a replica of the painting but with smaller dimensions, like other landscapes animated by numerous figures, to satisfy the public’s taste. Rossano, in 1876, distanced himself from such demands and moved to Paris, where he stayed until 1892. In Paris, Giuseppe De Nittis introduced him to the Gouncourt brothers, Emile Zola, Edgar Degas and Edouard Manet. He also received economic support from the gallery-owner, Georges Pétit and the writer, Jules Claretie. In the same period, Rossano deepens his search for truth through lessons in landscape painting at the Barbizon school and the late work of Corot, who he admired for his use of suffuse colouration, explored in all of his tonal variations, all at once grey, brown, and rust-coloured. He also admired the work of Camille Pissaro who he stayed with when painting in the Auvers and Montretout valleys, the Merielle and Bruy forests and on the shores of the Seine. The results of these trips are regularly sent to the Parisian Salons, where Rossano exhibits from the first time in 1876. He was also invited to participate in the Universal Exhibition in 1878 and 1889, both as an exhibitor and judge. Now known in the French market, in 1889 he organised a retrospective in Paris. In 1892 he returned to Naples and three years later he took the position of Chair of painting at the Regio Istituto di Belle Arti, that he held until 1902. At the same time, he began to exhibit once again in the Naples Promotrice – with Effect of snow in 1894 and Surroundings of Aversa in 1897 – as well as nationally.

Manage Cookie Consent
To provide the best experiences, we use technologies like cookies to store and/or access device information. Consenting to these technologies will allow us to process data such as browsing behavior or unique IDs on this site. Not consenting or withdrawing consent, may adversely affect certain features and functions.
Manage options Manage third parties Manage vendors Read more about these purposes
View preferences
{title} {title} {title}