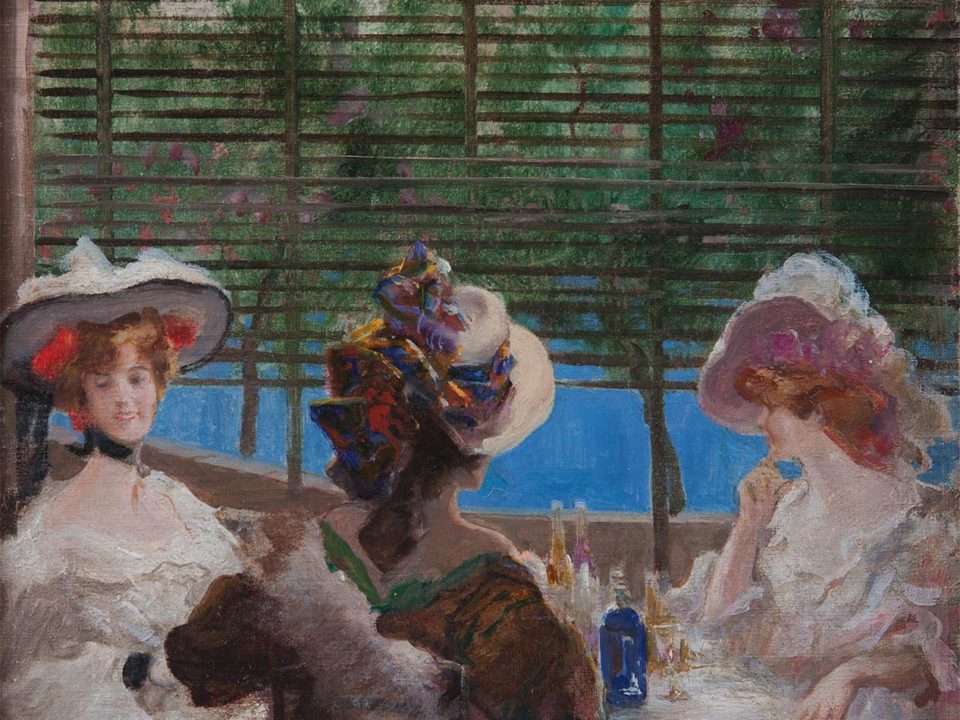 Pompeo Mariani was born in Monza on 9 September 1857 to Martino and Giulia Bianchi, sister of the well-known painter, Mosè. Upon finishing secondary school, he was sent by his father to begin a banking career at the Cavagliani and Oneto bank in Milan. Here Mariani met Aldo Noseda who introduced him to the cultural and artistic circles of the time. It is here that he befriended the writers Arrigo Boito, Gaetano Braga and Luigi Gualdo, and the painters Luigi Conconi and Vincenzo Bignami. In this period he developed a passion for music and painting, demonstrating a particular propensity for caricatures. In 1878 he lost his job after completing a caricature of his boss, forcing him to return to Monza. Some months later he returned to Milan, pushed by his desire to pursue a career in art. Thanks to his friend, Uberto Dell’Orto he visited the atelier of the painter Eleuterio Pagliano, who introduced him to the study of anatomy and artistic techniques, inviting him to paint en plein air. Still in 1878, he took part in a number of alpine excursions in the Gottardo, later exhibiting at the Promotrice in Turin with a series of views from mountain tops, amongst which Lysion Pathway (1880). In January 1881 – together with Dell’Orto and Sallustio Fornara – he carried out a trip to Cairo, Egypt, where he completed an intense series of drawings, sketches and colour plates. In April of the same year, a lesion to one of his eyes caused by a sandstorm forced him to return to Italy. The works completed in this period – many of which based on his studies in Egypt – are presented at the Fine Art Exhibition of Milan (1881 and 1882) and Rome (1883), and at the Nice International Exhibition (1883), where they are immediately sold and acquired by mostly foreign buyers. In the summer of 1883 Mariani was in Genova, a guest of his sister Anna in the Palazzo Doria, overlooking the port. Here he began an extraordinary series of views of the maritime seaport, amongst which Salute of the dying sun, winner of the 1884 Premio Principe Umberto. In Genova he also became familiar with Dutch painting through the Paris dealer, Adolphe Goupil, who from 1885 began to acquire numerous works by Mariani. In the same year he exhibited at the Salon of the ‘society of French artists’ in Paris with works of Egyptian and maritime subject matter for which he won a gold medal. He also participated in the London International Exhibition with The night at the port in Genova, awarded with a silver medal. In 1886, the painting Saltwater received a similar prize at the International Exhibition in Liverpool, whilst two years later Farewell tears won the gold medal at the Internationalle Kustaustellung in Monaco. In 1889, Mariani travelled to Rome to paint King Umberto I for the Palatina Chapel in Palermo, and in the same year he sent Basin water and Springtime corner to the Universal Exhibition in Paris, gaining an honourable mention. In 1891 he was in Gignese, near to Lago Maggiore, where he completed several landscapes en plein air. Between August and October 1892 he was again in Genova to celebrate the Easter holidays, during which he was inspired to create a series of works of large dimension, subsequently exhibited at various exhibitions. In 1898 he travelled to Bordighera, where he would spend time until 1889, eventually moving there permanently in 1908. From here he often visited Monte Carlo, attracted by the elite and elegant lifestyle of its casino, which he enjoyed depicting on canvases of various sizes, achieving great commercial success. In 1910 he participated at the Autumn Salon, whilst in 1919 he completed a portrait of Queen Margherita of Savoia.